New dates are being added all the time – join us for the MOST interactive, all-request show in NYC! All your favorite songs, never the same twice!

Music, comedy, games, roasts, toasts, and so much MORE!

After exactly a year of absence from New York City, Shake Rattle & Roll Dueling Pianos returns to LIVE performance on March 12th with a Dinner & Dueling Pianos show!
Curated by Gran Morsi in Tribeca, the show will feature a 3-course Italian FEAST and the longest-running Dueling Pianos show in NYC history!
Seating will be socially distanced and VERY exclusive for this once-in-a-lifetime experience.
Tickets are $30-35, and the included dinner is just $59/pp plus 2 drinks.
Fun for birthdays, bachelorettes, and groups of all sizes.
Get your tickets before they’re GONE – at bit.ly/SRR31221

If you’ve made it to 2021, and looking to liven up your entertainment options – try a Dueling Pianos Livestream for your next event!

It’s fully interactive, with an all-request structure that allows your guests to request their favorite songs in real-time. And, they can participate actively in the show, rather than just spectate. If you want, your guests can even be onscreen WITH our performers, making them the stars of the show!
Everyone at the show can chat with our performers, and with each other, just as if we all shared the same physical show-space. And there’s MORE.
Not just music, but comedy, games, roasts, toasts, contests…all 100% customizable for your needs.
Dueling Pianos fits corporate functions, client promotions, family celebrations, social occasions, and events of all sizes. From 2 to 2000, our performers make every guest, every client and event party unique.
Our song base is virtually UNLIMITED, with tunes spanning rock, pop, country, R&B, Motown, hairbands, boy bands, disco, dance music, and anything else you can think of.

Alongside traditional Dueling Pianos livestream shows, we offer many other events. Perhaps our proprietary Piano Bingo games, fusing the interactive nature of our piano bar shows, and the competitive fun of BINGO, is a fun change of pace from the usual icebreaker games.
Or perhaps you’ll like our Name That Tune game show. It’s a game show which mixes name-that-tune with lyric quizzes, trivia questions, and live performers for the ULTIMATE music challenge!
In addition to running MORE livestream shows than any other piano entertainment companies, we also maintain a robust schedule of weekly public shows. Check our calendar here!
Watch a sample of our virtual Dueling Pianos show here!

Who says that Dueling Pianos is just for classic rock?! If you want to keep things contemporary, here’s the top 10 songs of 2010s that will keep your piano bar party pumpin’!

What is arguably the biggest dance-floor hit of the past decade, and a MUST-have for your next Dueling Pianos show – is the Mark Ronson/Bruno Mars smash – UPTOWN FUNK!

Singalong pop? Absolutely! The 2010s were full of great hooks, and none catchier than CALL ME MAYBE!

Controversy? The decade had its share, and the Dueling Pianos show is no stranger to a little naughty content after dark. And if there’s a great beat, even better. Enter, BLURRED LINES.

But if it’s a slow jam you’re looking for, or a twirl around the dance floor with that someone special, or just to relive your prom night dedications all over again, then call Ed Sheeran, because his song is PERFECT.

Another of the top 10 songs of 2010s is Meghan Trainor’s catchy hit – and let’s face it ladies, who isn’t ALL ABOUT THAT BASS?

Our NYC Dueling Pianos show is fun for all ages, because no matter how old you are, when you’re here, WE ARE YOUNG.

Sometimes, you want that one special song that you can enjoy on the dance floor, with just that one special person. John Legend’s got you covered, and so do we – there’s no better slow dance from the past decade than ALL OF ME.

What visit to the top 10 songs of 2010s would be complete without at least SOME representation from Tay-Tay? So, we give you her biggest hit of the decade, and an excellent selection for a group-singalong – SHAKE IT OFF!

No one loves the one-hit wonders more than the piano bars do, and this past decade had plenty to offer, including Iggy Azalea’s FANCY!

And finally, when you combine a great pop singer, a great pop song, and some epic pop culture references from an animated movie, you get a recipe for Dueling Pianos awesomeness! CANT STOP THE FEELING has it all.

Now that you have your list – come see a show! http://www.ShakeRattleRollPianos.com

PS – all of these videos can be found on our YouTube page!

At Shake Rattle & Roll Dueling Pianos of NYC, special requests are nothing new. So recently, when we featured a Dueling Pianos show with all-female requests, it put us to the test! Yes, most of rock and pop music is sung by, written by, and aimed at the male of the species, but there’s ALOT of great ladies piano bar songs!

So, for your next piano bar trip, if you want to find some estrogen-tatsic tunes, here’s your piano bar primer:

Nothing speaks to the female empowerment of a singalong show like I WILL SURVIVE, the ultimate song for the feisty female! Stand back fellas, the ladies are here!

And speaking of feisty, the millennials can’t get enough of Alanis Morissette – or her anthem YOU OUGHTA KNOW!

The undisputed queen of rock is NYC’s own Pat Benatar. What? You don’t think HIT ME WITH YOUR BEST SHOT can ROCK a piano bar? Check THIS out…

Wanna see a dance floor fill up? Just lay down some Tina Turner and the dance moves FLY! Everyone’s got a secret windmill-factory and they’re dying to show it off!

Want something more current? If it’s a Shake Rattle & Roll Pianos show, then we got all the top 40 covered! Even the most recent hot tracks, like LIZZO!

Would any list be complete without some Whitney Houston? Whether it’s an intimate piano bar, a casino, or a crowded dance floor, with the right song, it’s always a party!

And don’t forget the ladies of Country Music. From Dolly to Dixie, and from Connie to Carrie, no song tells a story like a great Country Music song can!

And before we go, let’s take it back…for an Aretha Franklin classic – everyone knows how to sing it…and how to spell it – RESPECT!

All the great ladies piano bar songs – now go have a great night out! 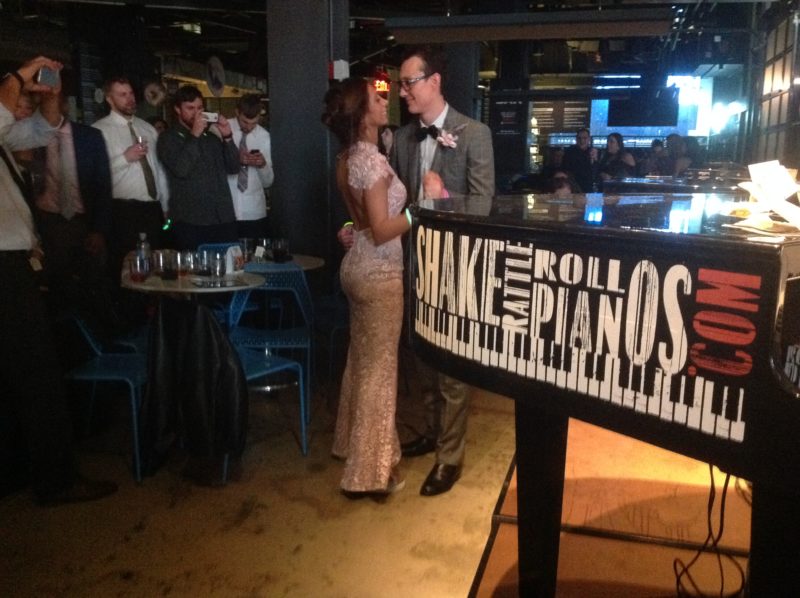 What are the TOP 10 Dueling Pianos songs?
Dueling Pianos shows like Shake Rattle & Roll Pianos in NYC pride themselves on knowing THOUSANDS of songs, on command. But there are definitely a prime list of the MOST popular songs that everyone loves to hear, and sing along to.

#10 – Singalongs are the heart of a great Dueling Pianos show, but sometimes you gotta put the PIANO in Dueling Pianos, and to start things cookin’, you need GREAT BALLS OF FIRE!

#9 – Country music isn’t just for guitars & fiddles anymore! A perfect country chorus can get an entire bar singing along. Especially if that song is FRIENDS IN LOW PLACES by Garth Brooks!

#7 – Dueling Pianos covers EVERY genre, from show tunes to speed metal. And we certainly wouldn’t neglect a popular hip-hop song about the posterior. Because we like it. And we cannot lie. BABY GOT BACK.

#6 – You can’t have the top 10 Dueling Pianos songs without featuring some of the Dueling Piano Men – namely Elton John. His BENNIE & THE JETS is the ultimate call and response song (Benny – BENNY!, Benny – BENNY!).

#5 – Hairbands. 80s. On pianos. A match made in Dueling Pianos heaven since the beginning of time, or at least the 80s. LIVIN’ ON A PRAYER by Bon Jovi, because a great singalong needs a great OHHHHHHHHHH section.

#4 – Nothing makes an EPIC night like an EPIC song. Enter – BOHEMIAN RHAPSODY – the epic-est song of all! Appearances in Wayne’s World and the recent Queen bio-pic haven’t hurt any. Mamaaaaaaaa!

#3 – SWEET CAROLINE. Just saying the name, for a New Yorker, gives you hives. For the uninitiated, not only is this a classic Neil Diamond singalong, but it’s also the Boston Red Sox 7th inning anthem. So, the NYC crowds love this song for other reasons than perhaps the rest of the country (namely stopping it for New York New York…), but it’s still popular enough to nab the bronze medal spot on our Dueling Pianos list!

#2 – You knew this one was coming, but not at the top spot! Billy Joel’s eponymous piano bar theme song – PIANO MAN. Sing us a song, wontcha!?

#1 – The all-time heavyweight champ of the piano bar circuit is DON’T STOP BELIEVIN’ by Journey. This anthem has been boosted by appearances on cultural touchstones like Glee, The Sopranos and Rock of Ages. And let’s be honest, because who doesn’t like a rousing chorus like this one!
That completes our visit to the Top 10 Dueling Pianos requests! Now get out there and sing along!
You can visit us in NYC at http://www.ShakeRattleRollPianos.com and see a show THIS WEEKEND!

One of the hallmarks of the Shake Rattle & Roll Pianos shows is our ability to mix up songs, even when they’re worlds apart.

Like show tunes and boy bands. Les Miserables and Backstreet Boys may not seem like they have anything in common.

We beg to differ.